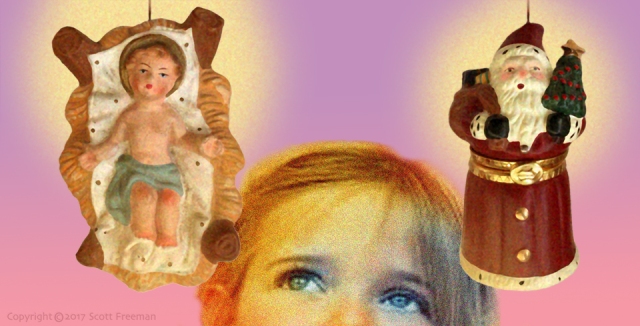 I’ve hesitated to write about the Jesus vs Santa topic because it can be a surprisingly divisive topic in church and family cultures. However, the holiday season is upon us and I think it’s interesting and even helpful to hear differing perspectives on how parents handle the issue. I would love to hear your perspective as well.

The church cultures in which Mollie and I raised our kids have been theologically conservative, highly biblically literate, and conducive to sincere devotion in following Jesus. I got the impression over the years that our family held the minority position in those churches in that we openly practiced the Santa tradition.

For some no-Santa Christians, the idea of Christians practicing the Santa tradition can seem incomprehensible. I don’t care to sway anyone to my position, but for what it’s worth I thought I would share my reasons why my wife and I chose to follow this secular holiday tradition. Our reasons may surprise you, because they ultimately have to do with Jesus.

Following are my responses to the most common reasons I’ve heard for not observing the Santa tradition:

1) We want Jesus to be the focus of Christmas in our family
Indeed. Of course we wanted this for our family as well. However, it’s not an either/or issue. I know this because I was raised in a Christian home that kept the Santa tradition, yet I and all of my sibs love Jesus today, and none of us believes in Santa Claus anymore. I can remember as a kid that, even though my imagination excited me about Saint Nick, my parents also taught us that the real reason for Christmas was the birth of Jesus. I believed them, and it made perfect sense to me.

I definitely got the idea that Jesus and Santa Claus were somehow on the same team.

Later, as a parent, I had what I saw as a strategic reason for keeping the Santa tradition. From the time my children were small, of course they learned about the story of Jesus and His birth. However, I knew they could only understand so much, and I certainly couldn’t expect them to sit around and stare at their navels pondering Jesus all Christmas season. So we enlisted Santa Claus to help make the season of Jesus’s birth more exciting for them. We knew they would eventually drop the Santa belief as they left childhood, but we believed there would remain with them very positive feelings and fun memories that they would carry with them into adulthood. The reason behind it all would always be Jesus.

I believe this has proved to be true.

2) I’m not comfortable lying to my kids
I completely agree with this one. Our kids assumed Santa was real mostly because of songs and stories and the input of extended family members. Christmas mornings pretty much convinced them. However, as they got older and directly questioned us, we made it a point to never to lie to them.

However, I used it as a way to encourage critical thinking. I told them that I wanted them to figure it out on their own. I told them that all of their lives people would tell them things that were not true and that they needed to learn how to discover what is true. This wasn’t a very satisfying answer to them, but then it became sort of a game. They would begin to give me arguments and I would try to argue the other side. If their argument was a good one, I would say “that’s a good argument!”

More importantly, for each child I also used this moment to underscore the truth, saying something like: “I will tell you this – the story of Jesus and everything in the Bible is definitely true, and Mom and I believe it.” I wanted them to be rock solid about that.

I think there is something very healthy about a child learning to critically engage in figuring out the truth, even when it is against his or her interest to do so.

3) Christmas is a pagan holiday. Christmas trees and Santa Claus have pagan origins.
I have always thought this was a lame argument for several reasons. Primarily, regardless of what December 25 meant many hundreds of years ago, today, in America, it is not a pagan holiday. For followers of Jesus it is a remembrance and celebration of the birth of Jesus.

True, no one knows the date of Jesus’s birth. This is also irrelevant. So the church randomly picked a day to celebrate the birth of God’s Messiah. Or maybe the date is not so random, and the church picked a popular pagan holiday and redeemed it to become a holiday celebrating the true Creator. I just don’t see how that’s a bad thing. Even today many Christians attempt to do the same thing with Halloween.

Christmas is arguably not a biblically condoned holiday, but that does not make it a harmful practice. Behind this objection there seems to be a concern that all of Christendom is somehow accidentally participating is false worship because of the holiday’s origins. But worship is intentional and conscious. I have yet to see biblical support for the idea of someone accidentally worshiping Satan. I’m willing to be proven wrong on this.

4) I don’t want to encourage materialism and selfishness in my kids.
Another great reason. We didn’t want to encourage those things either. I probably don’t need to say much here though. I think we all recognize that Christmas has become very commercialized and money driven. Many people go deeper into credit card debt during the Christmas season. Not good.

I’ve heard a lot of great strategies that families use to get around this. Some don’t do gift giving at all. Some do, but make a point to give to a needy family each year as well. Some work at a shelter as a family as part of their Christmas season, serving those less fortunate than they are. Some do gift giving but limit the dollar amount that can be spent. Please feel free to share your ideas or traditions in the comment section!

But as for the topic at hand, it certainly hasn’t been my experience that observing the Santa tradition will necessarily encourage materialism and selfishness. My opinion is that the example of the parents over the long haul is foremost in encouraging or discouraging a materialistic lifestyle. In fact, ironically, Santa only exists because of the generosity of parents toward their children. When children figure out that it was mom and dad all along, this arguably encourages gratitude and models selfless giving to them.

On the positive side, there are a couple of other reasons that proved to be quite important to Mollie and me when we were determining what our family culture would be around Christmastime:

Extended family
I was raised by devoted Christian parents. Had Mollie and I refused to practice the Santa tradition on “spiritual grounds” I think it would have created an unnecessary offense against my parents and siblings. There were other things more important to us that my parents didn’t understand, like breastfeeding, homeschooling, and eating a whole food/organic diet. Creating a rift over something as fun and harmless as Santa Claus would have been just been super-annoying to my family.

To see it from my mom’s perspective: she and her 6 siblings grew up in St. Louis with an alcoholic father. As a result she grew up impoverished, and quit school after the 8th grade to start working. She told us that when they were young, she and her siblings would sometimes each receive an orange for Christmas.

So when she married my dad, I think she tried to make holidays with her own children everything she missed as a child. I have wonderful holiday memories from childhood, and I still love the Christmas season. I think my mom would’ve been hurt had I implied that I saw her efforts as harmful.

Christmas morning with my siblings, 1962

Joyful, Joyful
In our family, Mollie and I wanted to tip the scales in favor of making the Christian holidays transcendent and irresistible; something that our kids would look forward to all year long. Santa Claus is unnecessary. If you’re a parent and you don’t include Santa in your repertoire of holiday traditions, I fully respect your decision. However, I would encourage you to figure out ways to make the holiday season an exciting and transcendent time for your kids, so that they will grow up loving the season of Jesus’s birth. Ultimately, we all hope to see our kids continue to love the person of Jesus Himself.

For me the bottom line on Santa is: he’s a harmless, if shallow, part of American culture.
If we can figure out ways to use harmless cultural traditions to our advantage,  I think that’s a good thing.

My illustrated kids’ storybook, The True Story of Christmas, tells the story of Jesus in fidelity to the Bible, beginning with creation and the fall. Orders should be received by Dec 5 to ensure delivery by Christmas.
(Or, please email me directly me with late orders at scottnmollie@yahoo.com.)

8 comments on “Jesus vs Santa Claus”