The words of Jesus have a way of keeping His followers off the fence. For example, in the ongoing religious freedom and marriage equality “debate,” it is sometimes pointed out that Jesus never said anything about homosexuality. Therefore, some have argued, perhaps followers of Jesus shouldn’t be saying anything about it either.

However, while it’s true that we have no record of Jesus specifically mentioning homosexuality, we do have an extremely pithy statement from Him about what God intended marriage to be. This is fitting, because today’s marriage equality debate is not ultimately about homosexuality anyway as the Left and its sympathetic media would have us believe. The debate is and will continue to be about the redefining of marriage.

The statement on marriage made by Jesus is remarkable in its relevance, precision, and transcendence. In three sentences there are at least eight defining aspects articulating what Christians believe the Creator of marriage intended marriage to be. I’ve created a diagram (below) so that this can easily be seen.

But first, I want to examine a meme that has been circulating in discussions on social media. It supposedly shows why the Bible doesn’t support “traditional marriage.” (The white caption is mine because I couldn’t resist commenting.)

How can “biblical marriage” be a thing?
The argument is that marriage has changed over millennia many times, and that the current redefining of marriage to include same sex couples is simply another iteration of an evolving institution. After all, the Bible itself contains many examples of marriages that today’s evangelicals consider to be objectionable, so how can evangelicals argue for “biblical” or “traditional” marriage?” Here’s the meme: 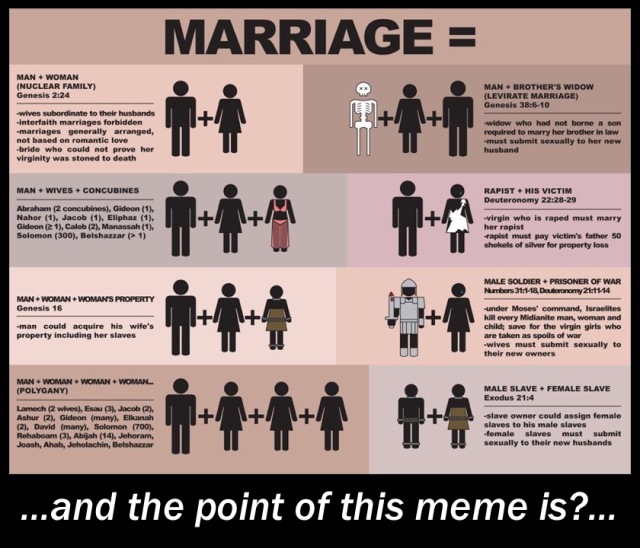 There are at least three reasons why this meme fails:

What Jesus said
Jesus begins His statement on marriage by referring, not to Levitical law, but to the unspoiled created order: “Have you not read that he who created them from the beginning made them male and female?” This refers to a passage in the first chapter of the Bible where we find the phrase,

“So God created man [meaning both men and women in Hebrew] in his own image,
in the image of God he created him;
male and female he created them” (Gen 1:27)

Thus Jesus’s defining statement on marriage is rooted in a transcendent basis for the worth and equality of the two sexes: both were made in the image of God, reflecting His likeness.

Proceeding from there, He goes on to either explicitly state or imply the defining characteristics of marriage as God conceived it. Since everyone likes rainbows now, I’ve shown this in a rainbow-colored chart:

As you can see, types of unions that fall outside of Jesus’s ideal of marriage would include homosexual, polygamous, incestuous, promiscuous, “monogamish,” and temporary sexual relationships, to name a few.

Definitions draw distinctions. If marriage has any definition, then it must exclude some people. It is important to note that by focusing on gay marriage, the U. S. Supreme Court’s 2015 Obergefell decision also excludes many consenting adults who at this moment want the legal right to marry but instead suffer discrimination. (Read their testimonies here. Please be warned that they may be sexually explicit.)

In addition to Jesus’ statements, the New Testament states that marriage is a “profound mystery that refers to Christ and the church” (Eph 5:32.) Throughout both testaments of the Bible God repeatedly uses heterosexual marriage as a metaphor to describe His relationship with His people. In the New Testament, the church of Jesus is often described as His bride. Furthermore, marriage is widely understood to be a reflection of the unity-in-diversity that exists within the loving, generative, triune Godhead itself.

Thus, for the majority of those who follow Jesus and the Bible, lifelong, monogamous, heterosexual marriage is a profound ideal with both practical and symbolic applications.

Admittedly, Jesus articulated a very high bar for marriage. Of course, this is not to say that people in alternative types of unions should be hated, or executed, or harassed, or fired from their jobs, or generally refused service, or be otherwise excluded from the human family. But their relationships are simply not marriages according to Jesus. Jesus commanded His followers to love everyone, but He also called them to observe His teaching, which He claimed to be truth. It’s really that simple for Christians (John 8:12, 14, 31-32, 47, 51.)

So for followers of Jesus, this is not about hatred or bigotry. Despite what the news media continually says, it’s not even “anti-gay.” (Many same-sex-attracted people agree with and follow Jesus.) The Left is simply using hate-shaming to manipulate the public, move its agenda forward, and attempt to get Christians to shut up and leave the field.

However, neither does our Constitution allow congress to make a law “prohibiting the free exercise” of religion. For a great many American citizens, marriage is a religiously defined institution. Government may not force these people to participate in an ideological campaign to redefine marriage, sex, and gender.

Yay. This is freedom. It’s a two-way street. The Left is free to march on with its now-decades-long, disease-ridden, death-producing sexual revolution. Followers of Jesus are free to not join in the parade for a cause that they believe to be a bad idea that ultimately harms society in general and children in particular. People on both sides can have compassionate reasons for believing as they do.

The bottom line is that followers of Jesus simply don’t believe they have the authority to redefine a fundamental concept that God has so clearly defined. We happen to believe that human government does not have that authority either.

Fine. So why not hold to your beliefs privately and just obey the law?
Because secularism is not a neutral, default position. It’s not as though religious viewpoints are biased while secular viewpoints are somehow unbiased.

For example, abortion-on-demand is not unbiased public policy. Recognizing only gay marriage from among other types of alternative love relationships is biased and discriminatory. The opinion that gender is determined by one’s feelings while sex is determined by one’s body is simply one, unsubstantiated theory. In fact these three examples can be seen as part of an ideological, sociopolitical movement called postgenderism or transhumanism.

Should the state be forcing either of these two groups to participate in the other’s well-intentioned vision? Nope, not in a free society. But…wait…what if lots of celebrity actors and musicians and big corporations say that only “progressive” opinions on marriage and gender should be legally protected? Still nope. The correct answer in America is always freedom and pluralism (meaning the peaceful coexistence of competing ideas in a free marketplace of ideas) within the constraints of our Constitution.

This is not what Christians are advocating. Neither is it right for the federal government to redefine marriage along arbitrary, ideological lines, and then impose that definition onto everyone else. Americans for whom marriage is a religiously defined, fundamental, societal institution have a first amendment right not to participate in and associate with an ideological movement they believe to be malignant and morally objectionable.

The point of this post has not been to prove Jesus right. The point has been to simply point out what the gospel writers say He said about marriage. This is the crux of the current religious freedom “debate.” Religious conservatives are not misreading or cherry picking their own text when they disagree with “marriage equality.” Agree or not, there is a large population of the world that will not be going along with the ideological campaign to redefine marriage, and they have compassionate, humanitarian reasons for refusing.

Check out my kids’ storybooks designed to inspire love and reinforce a biblical worldview in the kids you love! SHOW ME!

9 comments on “What Jesus Said About Marriage Equality”