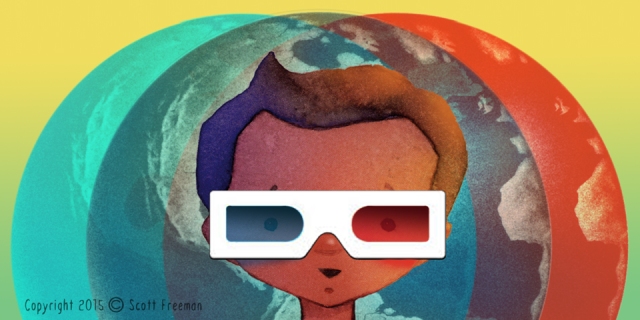 In doing an online search for biblical worldview, I get the impression that most people think of worldview as a topic for adults. Yet as parents, consciously or not, we are shaping our children’s view of reality in our world every day. I say this is a good thing, and that we should be intentional about it!

Wouldn’t it be ideal if we could impart a true and sustainable view of reality to our children that would serve them well for the rest of their lives? A worldview that won’t need to be traded in later for something truer, better, and more compatible with the real world?

I think that’s precisely what a biblical worldview is: a view of reality that is true; that works in the real world; that is based on our Creator’s revelation to us about His world. How could such a view be improved upon by finite minds attempting to figure out the shape of reality based on their own incomplete understandings?

A worldview is a lens through which we view the world. No matter who we are, we all bring beliefs, assumptions, and preconceptions to our understanding of the world. Some of these beliefs are legit. Some are not. As followers of Jesus we can expect that the Bible will give us true presuppositions that will far surpass those derived from a strictly materialist viewpoint. Despite expectations to the contrary from my Bible skeptic friends, the case for the reliability of the Judeo-Christian scriptures is stronger than ever in the 21st century.

But how does a biblical worldview affect our day-to-day living? Following are just a few examples of truths from the Bible that must shape the way we live as disciples of Jesus. These concepts can easily be imparted to children.

First, a brief reminder about how the Bible is written.

Biblical revelation is both linear and progressive
It is important to recognize that God’s revelation in the scriptures is linear and progressive. That is, certain truths were not known or understood under the Torah of the Mosaic covenant that were understood later under the new covenant of Jesus. This is not to say that the earlier writings contain falsehoods, but that the new covenant of Jesus was new in substance, not merely in time.

One clear example is that the terms of the Mosaic covenant made no promise of a resurrection and an afterlife. The promises to Israel under the Mosaic covenant were physical in nature. So the writer of Ecclesiastes could correctly ask, “Who knows whether the spirit of man goes upward and the spirit of the beast goes down into the earth?” (Ecc 3:21.) The idea of an eternal soul had not yet been clearly articulated in the scriptures. Even at the time of Jesus this was not a settled question. The Sadducees did not believe in a resurrection, because they held to the written Torah only. It was Jesus who first spoke plainly about resurrection and eternal life.

It is important to remember that revelation in the Bible is both linear and progressive because Bible critics often attempt to discredit a biblical worldview by offering spurious arguments. For example, critics charge that a biblical worldview would require believers to execute adulterers and homosexuals. But the Torah was given uniquely to ancient Israel until the time was fulfilled for something better to appear. Paul explicitly states that the Torah was a “custodian” until Jesus came bringing salvation and new life in the Spirit (Gal 3:23-29; Ro 7:4-6; 2 Cor 3:5,6.) Read as a whole, the scriptures simply do not allow the random taking of Old Covenant commands, out of context, and applying them to a New Covenant situation.

Having said that, there is much of value in the Torah that we should impart to our kids. Here are a few worldview-shaping ideas:

Creation
The first few chapters of the Bible say much about the shape of reality in our world today.
1) Human beings were created, male and female, in the image of God. We are not an accidental result of mindless evolutionary processes. Therefore, all human beings have transcendent, innate value by virtue of bearing God’s image. This concept alone is worth the price of embracing a biblical worldview.
2) We see that being in the image of a triune God also means that we are relational beings. Even though man existed in paradise and in companionship with his Creator, God still declared it “not good” for him to be alone (Gen 2:18.)
3) We see that God designed the binary, heterosexual reproductive system in humanity, and called it very good (Gen 1:27-31.)
4) We see marriage described as the creation of a new family unit, with “oneness” as the ideal (2:24.) This unity in diversity is yet another reflection of God’s image.
5) We see that there was both work and rest before the fall, therefore both are good and have their place.

Fall
The Fall of humanity into a state of separation from God is central to understanding the human condition and the world we live in. Because of human sin, with the Fall, disunity, death, disease, violence, and corruption entered the world. In the Bible, everything that follows the Fall is part of the story of God making a way to restore humanity to relational unity with Himself.

Flood
The Noahic flood demonstrates that our Creator has the right and the will to judge evil in His creation. The flood described in the Torah would’ve been the most unforgettable and horrific catastrophe in human history, permanently altering the surface of the earth. There are some 500 legends from around the world that speak of a great flood, many of which bear similarities to the biblical account. There are millions of land and sea creatures buried in layers of sediment all over the world – an observable testament to this event.

Israel
With Abraham, and then Moses, the establishment of Israel shows that our relational Creator has taken initiative to establish covenants with humanity. Israel was created to be a blessing to the nations and to point to the one true God (Gen 12:2,3; Lev 26:45.) God has not left humanity to fend for itself, but has prepared the world for salvation through Israel. Through foreshadowings in the Torah and through Israel’s prophets, God promised that a Messiah would come from Israel who would bring salvation to the world and set up an eternal kingdom.

Savior
Jesus fulfilled these messianic promises, bringing salvation to humanity, and establishing a New Covenant and the promised kingdom of God. By His sacrificial death on a cross Jesus perfectly satisfied the judgment of God, while also perfectly expressing His love for humanity. This salvation and entrance into His covenant and kingdom is by faith in the work of Jesus, through spiritual rebirth. It is received as a gift undeserved, not as something God owes us.

Faith
Contrary to the claims of “New Atheism,” biblical faith is not “belief in spite of evidence” (Dawkins.) This may be true of other types of religious faith, but biblical faith is not described this way. Biblical faith is relational and evidential – it has an object, God, and He goes out of His way to demonstrate His trustworthiness. So the idea of faith being “the conviction of things not seen” (Heb 11) does not teach us to ignore observable evidence. Rather, read in context, one sees that this passage gives historical examples of people who believed what God had promised despite circumstances that made it difficult to trust Him. The point is relational in nature. There is no conflict between biblical faith and rationality.

Love
Love must be foremost for anyone embracing a biblical worldview. The Bible describes God as love, and as light in whom there is no darkness (1 Jn 1:5; 4:8.) Jesus declared the greatest commandment in the Torah to be love for God, and then love for neighbor, saying all of the Torah and the prophets depend upon these two commands (Matt 22:36-40.) He stated that the way people would recognize His disciples would be by their love for one another (Jn 13:34,35.) He claimed to have existed in perfect love with the Father before the creation existed (Jn 17:23-25.) His chosen apostle Paul exalted love above all else in His New Covenant writings. Paul stated that he would be nothing, and would gain nothing, without love (1Cor 13:1-3.) He called love the fulfilling of the Torah (Ro 13:8-10.) We are to speak the truth in love (Eph 4:15.) We are to walk in love, in the example of Jesus (Eph 5:1,2.)

Worldview and the critical role of kids’ storybooks
Storybooks are one of the best ways to instill a biblical worldview in small children because stories can show them, rather than merely tell them, how the world works. Stories engage the whole person – mind, will, and emotions. By engaging the mind and the heart in a non-abstract and enjoyable way, stories reach the deepest part in all of us. Bullet points and abstract principles do not engage the emotions. Stories do. And they stay with us. If you would like to be notified of new, creative storybooks for kids that are designed to instill, reinforce, and normalize a biblical worldview in the children you love, you can sign up HERE.

I’m hard at work on my next book! It’s about LLLLLOVE! Can’t wait!…Stay tuned!

2 comments on “Biblical Worldview for Kids”