On August 31st I launched my new online children’s book company and introduced my first new kids’ book, The Cocky Rooster. I had planned to release my second new storybook in time for Christmas, but alas, I’ve been too overwhelmed with other projects.

Instead, I’ve decided to offer Naomi’s Gift at a reduced price for the month of December. Naomi’s Gift is a Christmas storybook that I published in 2006; the first children’s book that I wrote and illustrated. 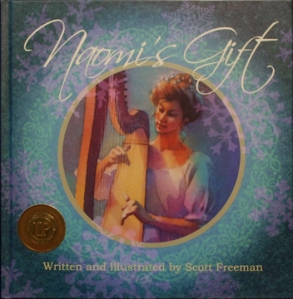 About Naomi’s Gift
Several years ago I received a newsletter in the mail that contained a story called The Tiny Foot. It was a powerful, true story told by a doctor named Frederic Loomis, who practiced in the 1920s. Each year thereafter, my Christmas season would not be complete unless I pulled out that old newsletter and read Dr. Loomis’s story again. When I was given an opportunity to write and illustrate my own Christmas picture book, I knew I wanted to adapt Dr. Loomis’s story.

Naomi’s Gift tells the story of a young frontier doctor who struggles to justify delivering a deformed baby girl to a poor farming family. Years later, he meets a mysterious young woman who helps him to make peace with his decision. The book concludes with a fitting summary of the meaning of Christmas and the good news of the coming of Jesus. In 2008, World Magazine reviewed the book and said, “It may seem like an unlikely tale for a picture book…but it’s a wonderful grace-filled Christmas story.”

I recommend Naomi’s Gift for kids 7 and up, including adults who still love Christmas and beautifully illustrated storybooks. Also, I recommend having a tissue nearby while reading.

Order in time for Christmas!
Ordinarily, Naomi’s Gift sells for $21 on my fine art website.
Now, through mid-December I’m offering Naomi’s Gift for $16.
That price will include shipping, and I’ll sign every book as well!

In order to guarantee delivery by Christmas, please order Naomi’s Gift by December 10.

Of course you can also purchase my new book, The Cocky Rooster. However, I received notice from my printer that, in order to guarantee your order by Christmas, you must place your Cocky Rooster order by December 1st.
As in, the FIRST DAY of December. That’s very soon!

Happy Thanksgiving, and thank you again for your support!