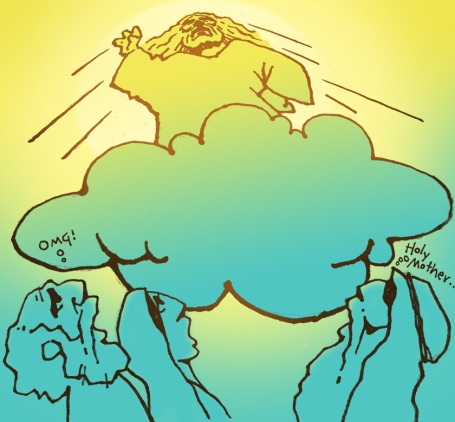 Thing #5 – The Ascension of Jesus
Here again, I’m amazed at how a belief that I once considered to be embarrassing has turned out to be an asset for everyone on the planet.

What was so embarrassing?
The story of the ascension just sounds so airy-fairy. Especially if you happen to be in an academic setting. You might as well say you believe Peter Pan is a historical figure. It sounds like a bedtime story: “…And then Jesus flew waaaay up into the clouds with the birds and butterflies while a band of angels and unicorns pranced gaily about on the earth below!” Maybe I’m making it worse than it is, but still…

You can read the actual account in Acts 1:1-11, but here are the key details:

Believe it or not, every one of these details turns out to be significant. Following are my top 3 reasons why the ascension matters.

1 – The ascension story makes it really difficult to be a fake Jesus.
It would be an understatement to say that Jesus has a great deal of influence. Not surprisingly, then, since Jesus left there is a long list of people who have claimed to be him. Many of their stories would be funny if they didn’t involve so many dead people. Some of the better known fake Jesuses have been:

Think about it. No one alive today knows what Jesus looked like. So how do you know that Marshall Applewhite wasn’t the second coming of Jesus? Well, this is what happens when people go cherry picking through the Bible. Even if you personally do not believe a word of the Bible, and even if you think this whole business of Jesus coming back is a bunch of baloney, you have to admit that those of us who do believe the Bible have a pretty strong litmus test for recognizing the second coming of Jesus: If he doesn’t come out of the sky in a cloud, he’s not Jesus. Simple! How reassuring is that – for both believers and non-believers alike!

It looks as though the real Jesus anticipated all of this. If you couple the angel’s message in Acts with the earlier words of Jesus, you get an unmistakably supernatural picture. Concerning His own return, Jesus said:

“…Then if any one says to you, ‘Lo, here is the Christ!’ or ‘There he is!’ do not believe it. For false Christs and false prophets will arise and show great signs and wonders, so as to lead astray, if possible, even the elect. Lo, I have told you beforehand. So, if they say to you, ‘Lo, he is in the wilderness,’ do not go out; if they say, ‘Lo, he is in the inner rooms,’ do not believe it. For as the lightening comes from the east and shines as far as the west, so will be the coming of the son of man” (Mat 24:23-27).

It’s supposed to be a very big event.

2 – The ascension of Jesus argues against participation in wacky, bloody, apocalyptic religious movements.
I’m so happy that Jesus ascended. I just never have to wonder if Jesus wants me to pick up a gun and shoot somebody in the face for His glory. Or, let’s say, fly an airplane into a building full of infidels. (See previous post). Before His crucifixion Jesus made this clear statement:

Then after his resurrection, he literally, visibly leaves the planet. Thank you Jesus. This pretty much renders illegitimate any violent, theocratic dictatorship headed by government officials claiming divine guidance. We don’t have to wonder. Such guidance does not come from above. To American ears this sounds obvious as we are accustomed to living with a separation of church and state. But for most of history, in most of the world, this hasn’t been, and often still isn’t, so obvious.

It certainly isn’t obvious in the Muslim world. It wasn’t obvious for most of Christian history either. With the establishment of Christianity as the religion of the Roman Empire, the Church of Jesus suffered the unintended consequences of being married to a political state. In uniting with human government, the Roman Church became an instrument of oppression, because government always entails force. Any religion or ideology that merges with any government will always tend to become coercive because, by definition, “government wields the sword.” Many of Christianity’s well-intentioned “church fathers”, including Chrysostem and Augustine, viewed the Roman Church as the kingdom of God on earth. This unbiblical viewpoint resulted in a lot of religious wars, and a lot of shed blood, supposedly in Jesus’ name.

But Jesus has left the building. Before leaving He made it clear to His followers that His two greatest commands are to love God, and to love people (Mt 22:36-40; Lk 12:28-31). He specifically commissioned His followers to non-violently spread the news of His kingdom, which is not of this world; even to suffer violence if necessary. Viewing the Bible as the internally consistent, ultimate authority on what Jesus taught, I have to conclude that even if a man has political power, and a shiny religious robe, and a jeweled pointy hat, if he contradicts what Jesus taught, then he’s not following Jesus.

3 – The ascension of Jesus shows concerns of an impending right wing theocracy to be hysterical nonsense.
In our current political setting, I have often heard that the religious right secretly plans to overthrow the American constitution and government, institute a theocracy based on Old Testament law, stone homosexuals, ban birth control and then force women to have babies, and implement who-knows-what other OT regressive measures that nobody wants. Over the years I’ve received political fundraising letters from the left that I wish I had saved, to show how goofy this accusation is. “New Atheist” Sam Harris is even worried that our elected officials might merely be praying and studying the Bible (The End of Faith, pg 47).

If you are also worried about this, or even if you wonder how widespread this desire for a Christian theocracy is among Christians, I have wonderful news for you today! If you wonder what is going on in all of those Bible-believing evangelical churches all across America every Sunday morning, I hope to set your mind at ease. I recommend that you simply visit a local, mainstream, evangelical church. You won’t hear anyone promoting theocracy during the sermon, so maybe afterwards you could ask around about when the secret theocracy planning meetings are held. (I’ve never done this, but I think you should). You will find instead that these people are busy raising their families, trying to make ends meet, serving the poor and homeless, raising money to support international aid and missions, and having Bible studies.

The Bible study part is really good news for you if you’re concerned about a Christian theocracy because there is no mandate for such a thing in the Bible. In fact, I’m sure it’s safe to say that most evangelicals think of “the American experiment” as a remarkably resilient and unique system of government based on Judeo-Christian concepts, (not laws), of which religious freedom is a cornerstone. All evangelicals I know love our constitution and Bill of Rights, and are primarily concerned with “progressive” political forces violating it. They want to preserve our free, constitutional republic, not overthrow it. I only say these things because I’ve pretty much attended church every week since 9 months before I was born, and now I regularly speak and perform at various churches, many of which are very theologically conservative, of the sort that you are told to be afraid of. I have never, ever, in my whole life, heard a sermon or conference speaker anywhere promote the idea of a theocracy.

The reason is simple: It’s an unbiblical idea.  Jesus has left the building, and He gave no instructions to set up a Christian government. You can relax. Even if you think the Bible is a made-up book of fairy tales, you can relax in the knowledge that crazies like me who do believe it are harmless little fuzz-balls who have been enabled and commanded by Jesus to love God and to love people. If some right wing leader ever does appear with a theocratic agenda, people who believe the Bible won’t follow him.

People who believe the Bible are your friend.

A final note
It is true that the Bible really does speak of something called the kingdom of God. In fact it is the main topic about which Jesus spoke, making it a topic dear to my heart. I will post on this topic the future, but, for purposes of this post I will summarize it this way: The kingdom of God is indeed present on the earth, but not in a political form within a geographical boundary. The kingdom is presently manifested on the earth within the collective body of all who follow Jesus and submit to His authority. The kingdom is not a metaphor – it truly is a government, of which Jesus is the head. Whenever you hear someone referring to Jesus as their Lord, this is what they are saying.

This kingdom crosses all national, political, economic, racial, church and denominational boundaries. Jesus said the kingdom is entered into through spiritual rebirth (Jn 3:3-7). In the kingdom there is no Jew or gentile, slave or free, or male and female; all are one in God’s Messiah; all enjoy a new relationship as sons and daughters in Him (Gal 3:26-4:7). The kingdom of God, the coming of which was predicted by the Hebrew prophets (Isa 9:6,7; Dan 2:36-45), was fulfilled partially, but definitely, at the time of Jesus’ first coming (Mat 12:28;16:28). It will only be brought to complete fulfillment at His return (Eph 1:9,10).

So, if you are an atheist or skeptic, this should tickle you pink. What could be more harmless? Basically you have a group of people who believe they have been commanded to love everyone, and to peacefully spread their message of love and unity in Jesus around the world. The world is a better place for this (example). There’s nothing political or coercive there. So long as Jesus never comes out of the sky in a cloud, you can chill, and blow the whole thing off as a joke!

Now…whoever you are, aren’t you glad that the Bible says that Jesus ascended into heaven?

8 comments on “Part 5: Five Things in the Bible that Once Embarrassed Me but that I Now Think are Freaking Profound”