A few years ago a police officer friend, Jon Holsten, asked me to illustrate a children’s book he had written. During a 3-year stint working as a detective in the sex crimes unit in Ft. Collins, Colorado, Jon had seen a need for a book that parents could read together with their children, to teach about inappropriate physical contact. The resources he knew of were too technical, or frightening, or otherwise inappropriate for kids. Our collaborative effort produced “The Swimsuit Lesson”, which was soon featured on Good Morning America, which in turn got the attention of The Oprah Winfrey show.

To my amazement, Jon was booked to appear on the Oprah Winfrey Show, and I began to think about how I might take advantage of the publicity from this once in a lifetime opportunity. I had always hoped to someday write and illustrate a Christmas storybook, and this seemed like the perfect time. I love Christmas, and with 5 children, Mollie and I have accumulated a pretty grand collection of books which we look forward to seeing each Christmas season. I was excited by the thought of making a contribution to the genre, and I knew just the story I wanted to illustrate. Years before I had received a newsletter featuring a true story that deeply moved me. I had saved that newsletter, and each year I would get it out and read the story again to myself.

The story in the newsletter was entitled, The Tiny Foot, written by a doctor named Frederic Loomis. While I loved the story, it had two problems. First, the doctor was clearly writing to an adult audience, as he went into a fair amount of technical detail about the birthing process. Second, the entire story took place inside of a hospital over a period of years. I didn’t want to illustrate the inside of a hospital, so I reset and rewrote the story to take place at the turn of the last century, out west, when doctors still made house calls on horseback to deliver babies. This way I would get to illustrate horses, and a small western town in winter.

The whole project was a blast. My lovely daughter picked two of her lovely high school friends to model for me. I sent them to her room with some references of Victorian era gowns and hairstyles, and asked them to replicate as best they could the lines and feel of the period. They pretty much had only some old white T-shirts, white fabric, and scissors to work with. I would make up the difference with my imagination. Eventually they came out into my studio, looking amazing. I lit them, and shot my usual lame, blurry-but-sufficient photos. One of my sons modeled as well. I also worked with the Loveland museum to get some period photos and artifacts. In short, from start to finish the book is full of things I love – art, music, the American West, antiques, the city of Loveland, my children, Christmas, God, and a great story about the innate worth of every human being. I can’t imagine  how it could get much better than that.

I titled the story Naomi’s Gift, and self-published the book. The Oprah thing never did materialize, but I had a wonderful time doing book signings and readings in Loveland and in several neighboring towns. In doing so I had the further privilege of meeting a lot of great people and hearing their stories, many of which were also quite moving. Following is a brief description of the story line, and a couple of short excerpts from the book:

Summary: A small town doctor rushes to the home of a poor, struggling family, to find the wife in the throes of laboring through a difficult breech delivery. During the course of the labor, the doctor realizes that the baby has a deformity, and the thought occurs to him to perform an “unsuccessful delivery” to spare the impoverished family, and the child, the burden of living with her disability. After an intense inner struggle, he can’t bring himself to do this, and he delivers the baby, though he always second-guesses his decision. True to his fears, the family sells their farm and moves away to seek treatment for the little girl. Years later the doctor meets a musician who helps him to make peace with his decision.

Excerpts: “…I married late in life, and God had blessed me with a very patient and understanding wife. It seemed our life together was constantly interrupted, but Gretta never said a word. She knew I hated leaving now more than ever, but duty was calling again. I kissed her and our new son at her breast. I breathed in their warm scent one last time, grabbed my black bag and my coat, and hurried outside into the cold, grey afternoon.” (pg 1)

“…As if in answer to that unspoken question, the baby suddenly began to struggle. I felt a strong surge of life as she kicked forcefully in my hand with her good leg. This was too much for me. I could not go through with my plan. I quickly delivered a malformed, but otherwise healthy, baby girl. The Hoseas were overjoyed. They scarcely seemed to notice her deformity. After a time, as mother and baby seemed to be doing well, I left some instructions with Mr. Hosea. Congratulating them and promising to return the next day, I headed back home. I remember I could not bring myself to say “Merry Christmas” to the Hoseas that night. It seemed too ironic a thing to say, knowing the broken gift I was leaving with them.” (pg 9) 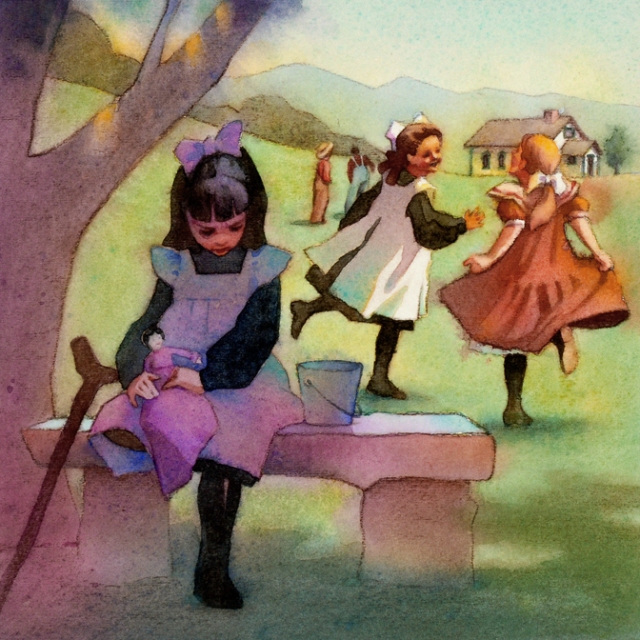 If you’re looking for a unique gift idea, Naomi’s Gift can be ordered through Paypal at my website: http://www.bigpicturepublishing.com

If you’d like a signed copy, send me an email and let me know who you’d like your book signed to. $20 will cover everything if shipped in the USA. Email: scottnmollie@yahoo.com